Our Ideals and Inspiration

1. God realization is the ultimate goal of life: One of the important discoveries made in ancient India was that the universe arises from and is sustained by infinite consciousness called Brahman. It has both impersonal and personal aspects. The personal aspect is known by different names, such as God, Ishvar, Jehovah and so on. Realization of this Ultimate Reality is the true goal of life, for that alone can give us everlasting fulfilment and peace.

2. Potential divinity of the soul: Brahman is immanent in all beings as the Atman which is man’s true self and source of all happiness. But owing to ignorance, he identifies himself with his body and mind and runs after sense pleasures. This is the cause of all evil and suffering. As ignorance is removed, the Atman manifests itself more and more. This manifestation of potential divinity is the essence of true religion.

3. Synthesis of the Yogas: The removal of ignorance and manifestation of inner divinity leading to God realization are achieved through Yoga. There are four main Yogas: Jnana Yoga (Yoga of Knowledge); Bhakti Yoga (Yoga of Devotion); Raja Yoga (Yoga of Meditation); Karma Yoga (Yoga of Work). Each Yoga is an independent means of realizing God. But since each Yoga involves the cultivation of one of the faculties such as reason, feeling or will, a combination of all the four Yogas is necessary for the development of a balanced, ‘fully functioning’ personality. It is this synthesis of Yogas that Swami Vivekananda regarded as the ideal of Ramakrishna Math and Ramakrishna Mission. This ideal finds expression in the EMBLEM of the twin organizations shown here, which was designed by Swamiji himself.

4. Morality based on strength: According to Swami Vivekananda, weakness is the main cause of immorality, evil and suffering in life, and the cause of weakness is ignorance about one’s true nature as the Atman. Knowledge of the Atman gives us tremendous strength to overcome our weakness and lead a virtuous life. Everyone is endowed with so many potentialities, but owing to fear and weakness, most of these potentialities remain unactualized. When, through knowledge of the Atman, fear and weakness are overcome, these potentialities manifest themselves. Swamiji called this process ‘man-making education’.

5. Harmony of Religions: Although the idea that ‘one Reality is known by different names’ (Vedas) and the idea that ‘different spiritual paths lead to the same goal’ (Gita) are found in the Hindu scriptures and in the teachings of several Hindu saints, Sri Ramakrishna was the first person in history to show through direct experience the transcendental unity of all religions. His message implies two kinds of religious harmony: harmony within Hinduism and harmony among world religions.

a. Harmony within Hinduism: Sri Ramakrishna did not identify himself with any particular sect of Hinduism but accepted Hinduism as a whole. He showed that Dualism, Non-dualism and other schools of Hindu philosophy represent different stages of the integral experience of Reality, and that the various Hindu deities are different aspects of one supreme Godhead. His message has brought about a great deal of harmony among the Hindu sects, and Sri Ramakrishna himself has become the symbol of the unity of Hindu religion.

b. Harmony among world religions: It should be noted that Sri Ramakrishna recognized the differences among religions but showed that, in spite of these differences, they lead to the Ultimate Truth. This is the meaning of his famous maxim, Yato mat, tato path, “As many faiths, so many paths”. Apart from this, Swami Vivekananda also held that the religions of the world are expressions of one eternal Universal Religion. Since Vedanta contains all the basic principles and laws of the spiritual world, Swamiji regarded Vedanta as the eternal Universal Religion. That is to say, Vedanta can serve as the common ground for all religions.

6. Avatarhood of Sri Ramakrishna: According to the Hindu religious tradition, God incarnates himself as Avatára in every Age in order to give a new message to humanity suited to the needs of each Age. In the Ramakrishna Movement, Sri Ramakrishna is adored as the Avatára of the Modern Age. What this means is that his life and teachings have opened a new way of salvation for humanity. The uniqueness of Sri Ramakrishna’s Avatárhood is that it embodies the spiritual consciousness of earlier Avatáras and prophets, including those who are outside the Hindu fold, and is in harmony with all religious traditions. In all the institutions of the Ramakrishna Order, worshipful reverence is shown to all Avatáras and the founders of all religions.

a. All work is sacred: According to Vedanta, the physical universe is a manifestation of God known as Virát. Hence, as Sister Nivedita has stated, there is ‘no distinction between the sacred and the secular’. What this statement means is that all work is sacred. Even menial work such as sweeping the floor or mending shoes is to be done with as much attention and devotion as work in the shrine.

b. Work as worship: The Gita (18.46 & 9.24) states that the all-pervading God is the ultimate source of all work and the enjoyer of the fruits of all sacrifice. Hence all work is to be done as worship and the fruits of actions are to be offered to the Lord.

d. Focus on service to the poor and the downtrodden: Swami Vivekananda was the first religious leader in India to speak for the poor and the downtrodden and to state boldly, ‘He who sees Shiva in the poor, in the weak and the diseased, really worships Shiva; and … with him Shiva is more pleased than with the man who sees Him only in temples.’ It was Swamiji who coined the word daridra-náráyana to refer to the poor. Swamiji’s love and concern for the poor continues as a directive principle in the Math and Mission’s service programmes.

Motto:
This two-fold aim of service activities, indeed the whole ideology of Ramakrishna Math and Ramakrishna Mission, has been put in a nutshell in the MOTTO of the twin organizations, Átmano mokshártham jagad hitáya cha‘, ‘For one’s own salvation and for the welfare of the world’, formulated by Swami Vivekananda.

The emblem of the Ramakrishna Order designed by Swami Vivekananda is a unique and unparalleled work of art created by one of the richest minds in contemporary history in an exalted mood of spiritual inspiration. It is a profound symbol of harmony and synthesis for reverential meditation in this present age of conflict and disharmony. This symbol is the epitome of Swamiji’s message of harmony and synthesis, leading to life’s fulfilment. This is indeed the most eloquent expression of what he really preached, what he wanted every man and woman to be, to realize, either in the East or in the West. The goal is to realize, even in this very life, one’s real Self, the self-effulgent Atman, the Swan in the emblem and through this realization to be free of all limitations, all bondages and all littleness. This spiritual freedom is one thing to be aspired for and achieved in this very life. It releases one from one’s prison-house of limited individuality and confers upon him or her, the blessing of universal existence. He then becomes one with Existence-Knowledge-Bliss Absolute. ‘Be free. This is the whole of religion’ said Swamiji. The meaning behind this emblem, in the language of Vivekananda himself:

“The wavy waters in the picture are symbolic of Karma, the lotus of Bhakti, and the rising-sun of Jnana. The encircling serpent is indicative of Yoga and awakened Kundalini Shakti, while the swan in the picture stands for Paramatman. Therefore, the ideal of the picture is that by the union of Karma, Jnana, Bhakti and Yoga, the vision of the Paramatman is obtained.” 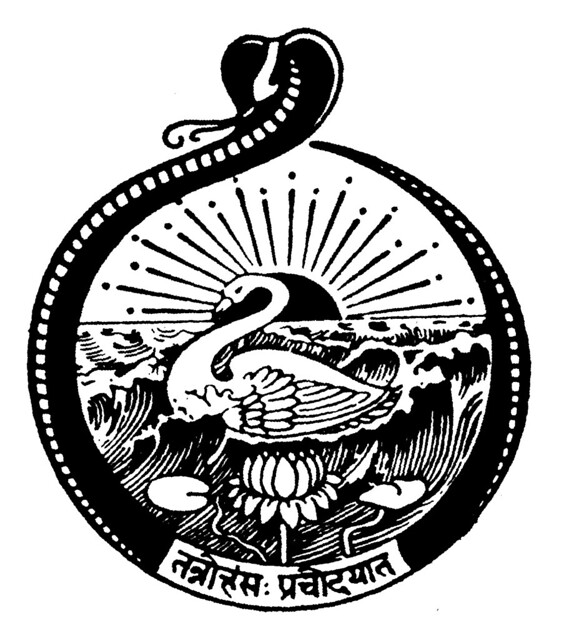 “The wavy waters in the picture are symbolic of Karma, the lotus of Bhakti, and the rising-sun of Jnana. The encircling serpent is indicative of Yoga and awakened Kundalini Shakti, while the swan in the picture stands for Paramatman. Therefore, the ideal of the picture is that by the union of Karma, Jnana, Bhakti and Yoga, the vision of the Paramatman is obtained.”